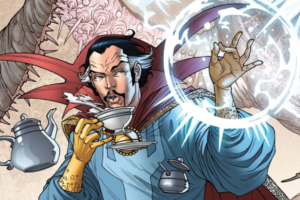 Doctor Stranger is another Marvel movie soon to set foot in the theaters. Its first ever trailer that has been released prior to the initial screening of another one of Marvel’s creations—Captain America: Civil War – has received quite positive reaction from the online community.

The Origin of Doctor Strange’s Power

To understand Doctor Strange’s power here, you must first understand how he acquired it. You should also have some understanding of his background. Doctor Strange, as his name suggests, is a doctor—a neurosurgeon to be more specific. He was a selfish individual, to whom only his wealth mattered. When he got into a car accident, the nerves of his hands got damaged, leaving him to make attempts to fix it on his own. However, none of his efforts bore fruit. Due to this, he ended up going to the Himalayas to seek the help of the Ancient One, a sorcerer.

However, instead of getting the help he traveled for, he was rejected by the Ancient One because of his selfishness. Things turned around when Strange was able to thwart the sorcerer’s assassination planned by his assistant. As a result, the sorcerer decided to teach Strange about the mystical arts. Strange then abandoned his endeavors to heal his hands and now train as a sorcerer. Soon he became the new Supreme Sorcerer.

With the training, he has received and his medical knowledge, he was able to develop his powers. From a highly esteemed neurosurgeon, Strange has become a well-developed and the ultimate sorcerer.

Marvel Building Up on the Combination of Science and Superpowers

It has been in the track record of Marvel to touch up on science and supernatural powers in a single film theme. But now, instead of anchoring the story on super strength and other super powers as a direct result of science, Doctor Strange here uses science in order to set the development and acquisition of powers.

Welcome to my Blog! Hope you like it. Thanks for visiting.